On July 19, 1799, a discovery was made that revealed much of what we know today about ancient Egypt. Napoleon Bonaparte
decided to extend his empire to the East and took forces with him to Egypt. In the process of digging a fort near the town of Rosetta, one of his soldiers found a strangely shaped black slab, which was inscribed with three different types of writing. The top, though damaged, contained Egyptian hieroglyphics; the center section was written in demotic, a form of shorthand writing of the Egyptian language; the lower part revealed Greek letters. 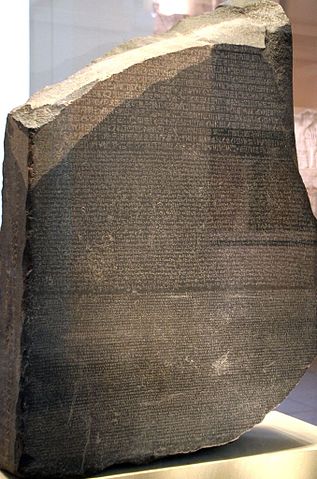 Until this discovery, almost nothing was known about the language of the ancient Egyptians. Ancient Greek was still familiar to scholars, however. The Greek part of the stone stated that the three sections of writing all said the same thing—they were descriptions of the decree issued by priests at Memphis on March 27, 196 BC to honor the anniversary of King Ptolemy V Epiphanes’ reign.  The British took possession of the Rosetta Stone in 1801 when they defeated Napoleon. Copies of the stone’s inscriptions were made and scholars all over Europe scrambled to be the first to solve the riddle of the hieroglyphics.

A breakthrough came when Thomas Young of England determined that at least some of the hieroglyphics represented letters of the ancient Egyptian alphabet. They were not purely a crude form of picture writing—for example, a hieroglyph that was shaped like a bird did not always refer to an actual bird. He identified the names of more than one Egyptian ruler in hieroglyphics.

Building on Young’s work, French Egyptologist Jean-Francois Champollion deciphered the hieroglyphics. He explained his findings in A Summary of the Hieroglyphic System of the Ancient Egyptians: “Hieroglyphic writing is a complex system, a script simultaneously figurative, symbolic and phonetic, in one and the same text in one and the same sentence, and I should say, almost one in the same word.” Some hieroglyphics represented letters of the Egyptian alphabet; some combined groups of sounds (for example, one hieroglyph represented letters that were commonly used together to save space), and some were added as pictures to clarify the meaning of a word.

Once the Rosetta Stone’s inscriptions were translated, scholars could learn more about the ancient Egyptians, their culture, daily lives, and religion. Since 1802, it has been displayed in the British Museum in London, though Egyptian archeologists are trying to bring the stone back to Egypt.

3 thoughts on “The Discovery and Translation of the Rosetta Stone”