The riot that broke out on the evening of June 20, 1943 at a popular beach park wasn’t the first sign of racial tensions in Detroit. During World War II, Detroit, a town already known for its manufacturing plants, produced one-third of America’s military equipment. The demand for blue-collar workers grew, and thousands of Southern African Americans flooded the city. They wanted better pay and better treatment than they received in the South’s sharecropping system.

By the early 1940s, one major problem existed: the manufacturing plants provided jobs but not housing. Where would the new migrants live? White workers made it clear that they didn’t want to live next door to African Americans. Across town signs like “we want white tenants in our white community” were put up. Detroit Mayor Edward Jeffries finally succeeded in obtaining some additional housing for blacks, but his efforts required a show of force. Blacks moved in to their new neighborhood only after the Detroit police and the National Guard escorted the new tenants. 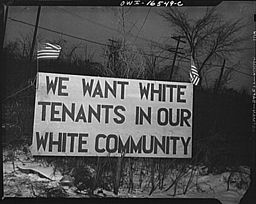 Life Magazine printed an article in August 1942 that predicted a larger clash between whites and blacks. The article said, “If machines could win the war, Detroit would have nothing to worry about. But it takes people to run machines and too many of the people of Detroit are confused, embittered and distracted by factional groups that are fighting each other harder than they are willing to fight Hitler. Detroit can either blow up Hitler or it can blow up the U.S.” The article proved to be prophetic.

On a hot summer day in 1943, tensions between the two races boiled over again. To escape the heat, over 100,000 Detroit residents went to an integrated beach called Belle Isle. The majority of the beachgoers were black. At first, small fights broke out among black and white teenagers. Black youths mugged whites, and white and black teens got into fistfights. By evening, however, the situation escalated. People tried to leave the island for the mainland, causing traffic jams. Stuck on the Belle Isle Bridge, a fight started between 200 blacks and white sailors. On the mainland, thousands of whites threatened blacks trying to cross. Though the Detroit police arrested dozens, rioting had already spread to other parts of the city.

Rumors only made the riots worse. Among whites, a rumor spread that blacks had murdered a white woman on the bridge. Among blacks, a similar rumor claimed that whites threw a black woman and her baby off the bridge. Whites attacked patrons exiting a theater patronized by African Americans. Streetcars filled with black people trying to go to work were stopped and passengers were thrown out. African Americans smashed windows of white owned stores and attacked anyone with white skin, including a doctor responding to an emergency call.