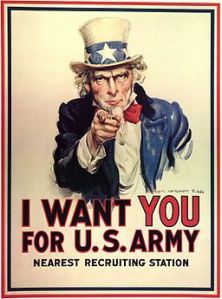 When Samuel Wilson moved to Troy, New York in 1789, he had no idea that he would become the inspiration for an American symbol. Four years after arriving in Troy, Samuel and his brother started a meatpacking business called E. and S. Wilson. They also produced the barrels that transported the meat. In Troy, Sam Wilson was known for his pleasant personality and his jokes. Since he was so likeable, the townspeople called him Uncle Sam.

During the War of 1812, the Wilson brothers were under contract to send food supplies to northern troops stationed in Troy. Every barrel of meat bore the stamp “U.S.” Sam Wilson meant the abbreviation to represent United States, but back then the only abbreviation for the country was “U. States.” Troy residents joked that the U.S. stood for Uncle Sam Wilson, who was supplying the army with food. The joke was told so often that all rations sent to the government were called Uncle Sam’s.

In 1813 references to Uncle Sam as a nickname for the United States appeared on local broadsides and in the Troy newspaper.

Images of Uncle Sam were drawn as early as 1830, but his physical traits varied with each artist. Some historians believe that a key factor in the development of Uncle Sam’s likeness occurred after the assassination of President Lincoln. Like Lincoln, the new Uncle Sam was tall, skinny, had a beard, and wore a top hat.

Cartoonist Thomas Nast gave Uncle Sam red-and-white-stripped pants and stars on his coat. In 1914 James Montgomery Flagg created the most famous version of the American icon. Flagg’s Uncle Sam has a stern face and points at observers. Beneath Uncle Sam are the words “I want YOU for U.S. Army.”

Samuel Wilson, the original Uncle Sam, became a wealthy businessman after the War of 1812. He remained popular in his community until his death in 1840. Eventually, Congress made Wilson’s connection with the symbol of Uncle Sam official. Congress signed a Joint Resolution on September 15, 1961 recognizing “Uncle Sam Wilson of Troy, New York, as the progenitor of America’s national symbol of Uncle Sam.”

2 thoughts on “The Origins of American Symbol Uncle Sam”