Before the election of 1844 former president Andrew Jackson requested James K. Polk to visit him. He told Polk that he wanted someone who favored the annexation of Texas to run for president and promised to back Polk for the job.

Polk had experience serving as governor of Tennessee and as a congressman, but more famous names were being considered. Still, Polk was nominated by the Democrats and won the election with his promise to acquire both Oregon and Texas for the U.S. At his inauguration “Hail to the Chief” was played for the first time. 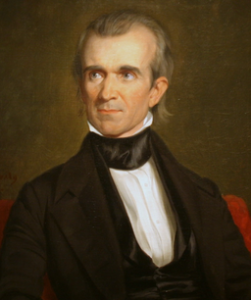 Polk is well-known for accomplishing his expansionist goals. Under his administration Britain ceded Oregon to the U.S. After a costly war with Mexico, Texas, California, and New Mexico became part of the United States, too.

Not everyone was pleased with Polk’s tactics, however. Polk claimed that war with Mexico was forced upon the U.S. because Mexican forces attacked the American troops that, on Polk’s orders, happened to be near the border of the two countries. A new congressman named Abraham Lincoln introduced “spot resolutions,” demanding that Polk identify the spot where American blood was shed on American soil. Indeed, it was unclear whether the troops led by Zachary Taylor had been in Mexican or American territory when fired upon.

Polk’s pro-slavery views offended others who did not want slavery to extend to new U.S. territories. More anti-slavery northerners began to leave the Democratic Party and join the Whigs.

Polk had promised to serve only one term and refused to run for another. He couldn’t have run for office again anyway because he was physically drained by his four years as president. He believed that “No president who performs his duty conscientiously can have any leisure.” Polk refused to delegate tasks and was the first president to insist on staying all summer in the White House despite the heat in Washington. His nearly non-stop work ethic contributed to his death three months after he left office.