Before the pharaoh Narmer came to power in 3100 B.C., Egypt was divided into small areas called nomes. Feuds between nomes and crime in general went mostly unchecked since there was no centralized state to enforce laws. In 3100 B.C., however, Narmer succeeded in uniting the country of Egypt. He first gained control of Upper Egypt (where the river Nile begins in the South) and then defeated a coalition from Lower Egypt (where the Nile spreads into the delta region in the North).

How do we know that Narmer was responsible for the unification of Egypt? Fortunately, archeologists discovered a stone carving in the shape of a shield that documents Narmer’s achievements. The carving is called the Narmer palette.

Front of Narmer palette, known as “the smiting side”

The front of the palette shows Narmer as the largest and most central figure. He is identified by the hieroglyphs at the very top of the palette. His figure is very muscular, and he is preparing to smite an enemy with his upraised mace. On this side of the palette, he wears the white cobra crown that signifies his rule over Upper Egypt. Below the king are two naked enemies that are trampled beneath his feet. Since Narmer already wears the crown of Upper Egypt, the enemies are likely from Lower Egypt. 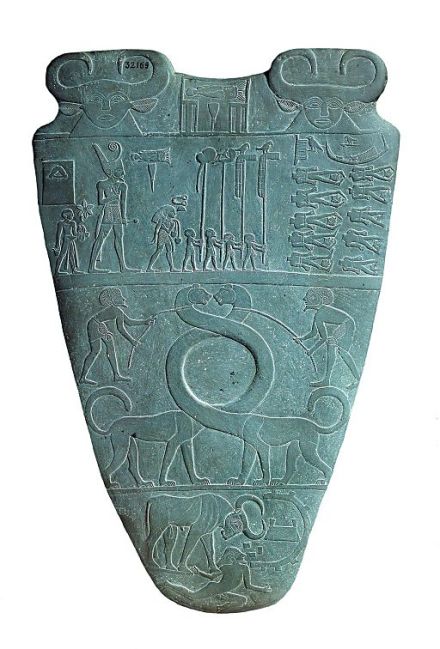 Back of Narmer palette

The back of the palette shows Narmer wearing the red vulture crown of Lower Egypt. He has clearly vanquished the enemies seen on the front and is celebrating his victory. Royal standard bearers walk ahead of the king in a procession. The procession stops in front of ten beheaded enemy bodies.

Thanks to the discovery of the Narmer palette, we have documentation for Egypt’s unification. The palette also emphasizes the strength and dominance of the pharaoh. In fact, the so-called smiting scene on the front appears repeatedly in ancient Egyptian art when a pharaoh wanted to document a victory.