John F. Kennedy, or Jack as his family called him, was born on May 29, 1917. He had an older brother, Joe Kennedy Jr. and seven younger siblings. He spent the first decade of his life in Brookline, Massachusetts. JFK’s father Joseph Kennedy Sr. didn’t play an active role in young Jack’s life since he was often away on business. His mother, Rose Kennedy, did have help with the children though. She needed it since Jack was often ill. The family joked that if a mosquito bit Jack, it would be sorry because it would catch whatever illness he had at the time.

Eventually the Kennedys moved to Bronxville, New York. Thanks to his father’s successful business ventures, the family could afford several different homes. They spent summers in Hyannis Port, Massachusetts. Easter and Christmas holidays took place at their home in Palm Beach, Florida. 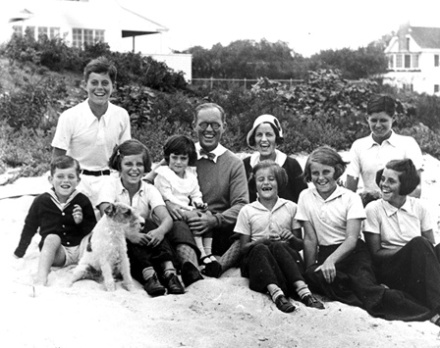 Jack and his older brother were extremely competitive. Joe Sr. encouraged this quality in his sons. He often said, “When the going gets tough, the tough get going.” Unfortunately for Jack, his brother was both two years older and stronger, so if they fought Jack got beat up. Jack couldn’t best Joe as a student, either. Joe had ambition. Since childhood Joe said that he wanted to become the first Catholic President of the United States. While Joe worked hard in all his subjects, Jack tended to pay attention only to the ones that interested him, such as English.

When he enrolled at Choate boarding school in ninth grade, Jack found other ways of distinguishing himself from Joe. While Joe was the better student and an accomplished athlete, Jack became the class clown. He formed a group at Choate called the Muckers, which was responsible for many school pranks. Most memorably, they exploded a toilet seat with a firecracker. Jack was nearly expelled for that incident. Instead, poor health interfered with his studies. He was diagnosed with colitis. It made him tired and he also lost his appetite. He got well enough to graduate in the middle of his class. Despite his mediocre performance as a student, his classmates voted him most likely to succeed.

Jack’s colitis interfered again when he entered Princeton and had to quit after six weeks. In 1936, he enrolled at Harvard. While there, he produced a campus newspaper called the “Freshman Smoker” and got a spot on the varsity swim team. He wanted to play football, too, but he ruptured a disk in his spine. From then on JFK always lived with back pain.

In 1938, Joe Sr. served as President Franklin Roosevelt’s ambassador to Great Britain. Both Jack and Joe Jr. went to Great Britain to work with their father. To prepare for his senior thesis, Jack traveled throughout Europe, the Middle East, and the Soviet Union. He returned to London on September 1, 1939—the same day that World War II began. Jack’s thesis pointed out that Great Britain was unprepared for war because it had neglected its military. Published as Why England Slept, his work became a bestseller. He used the money he made from the book to buy a Buick convertible, but he also gave the royalties he made from Great Britain to charity.

After graduation, Jack joined his brother in the U.S. Navy. Joe was a flyer and Jack was a Lieutenant assigned to the South Pacific. Only Jack came home. Joe Jr. died when his plane blew up during a mission in Europe.

Joe’s death changed everything for JFK. With his oldest son gone, Jack’s father encouraged him to abandon his interests in writing and teaching to run for Congress. JFK won a seat in the House of Representatives in 1946. His political career had begun.