The Mesoamerican ball game became the New World’s first organized team sport. It seems to have started around 1600 B.C. No courts were discovered from that time—only balls. The first ball court was built by the Maya in 1400 B.C. at Paso de la Amada. 1,300 courts have been found all over Mesoamerica, though the size of the courts varies.

The only eyewitness account of the game comes from Spanish priest Diego Duran. He saw Aztec games played in the 1570s. At that time, courts were shaped like the letter I. They had a central alley with sloping walls. On top of the walls, spectators could watch the game. There was no standard size for the courts; they varied between 100-200 ft. Stucco floors painted with the city’s patron deity acted as a kind of mascot for the team. 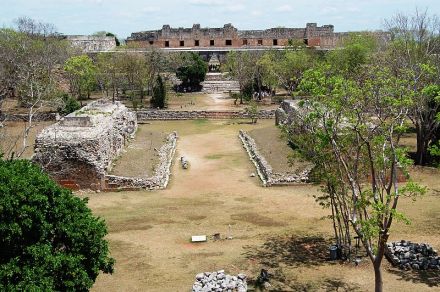 Aztec teams had between four and six players. They bounced a solid rubber ball back and forth using their buttocks and their knees. It was against the rules to use their feet or their hands. A center line was drawn down the court. The goal for each team was to get the ball back to the other side of the court by bouncing the ball only once on their side.

A team lost points if more than once bounce occurred or the ball went out of bounds. Points were earned by hitting the back wall of the opponent’s side. Most players guarded the back line so it was hard to score. A couple of players stayed up front to try and return balls. At the center line, rings were placed high up on the walls. If a team managed to get the ball through the ring they won automatically, but this was very difficult to do, especially without the use of their hands.

The ball was made of solid rubber and could kill a player if they were hit with it in the face or the stomach. Players who had survivable injuries viewed them as a badge of honor. Players often got injured because they didn’t have much protective gear. They wore only loincloths, thigh pads, and gloves.

Ball games were spectator sports. The audience bet on the outcome of the game, though nobles obviously bet more than the poor. People bet their land, crops, and some even sold themselves into slavery. Nobles had the best seats to watch the game. Afterward, the players expected them to throw gifts to the winning team. If some nobles tried to leave without giving anything to the winning team, those players were allowed to rob them.

The game served an important function in communities beyond just entertainment. Since each city had a team, disputes between cities could be resolved via a ball game. This solution was more practical and less bloody than starting a war.

Unlike many of today’s sports figures, Aztec ball players were unpaid and poor. They received some gifts and gambling earnings, but not enough to support themselves. Their payment came in the form of fame if they won. Many of the less successful players ended up as slaves to nobles.