President George W. Bush came into office with a dog who was already very familiar with the White House. Spot, or Spotty as family members called her, was the daughter of the first president Bush’s English springer spaniel Millie. Spot was named after Scott Fletcher, the shortstop on the Texas Rangers baseball team. She loved the outdoors and chased birds grasshoppers and anything else she could find at the Bush ranch in Crawford, Texas. Like many White House dogs she welcomed visitors to the Oval Office. President Bush said, “Spot understands the decorum of the Oval Office, so she gets to go in.” 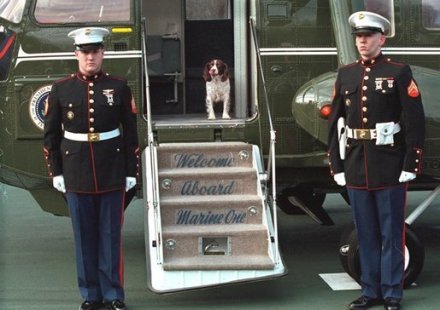 Spot aboard Marine One

In 2001 Spotty was no longer the Bush family’s only dog. Barney the Scottish terrier arrived shortly after the 2000 presidential election. Though he was more hyperactive than Spot, the dogs became fast friends. Barney lost his companion in 2004. Spot was euthanized at age 14 after having several strokes.

During his master’s time in office, Barney became a media star. He had his own website and “Barney cam” showed videos from his perspective of White House visitors and staff. The public looked forward to these videos on YouTube during Christmas time. President Bush called First Dog Barney “the son I never had.” Barney loved to play ball on the White House lawn and his favorite activity at Camp David was chasing golf balls. Though he was happy-go-lucky with the family, he didn’t like all humans. As First Dog he bit a reporter and another White House visitor. In contrast, he did get along with Miss Beazley, a Scottish terrier puppy given to Laura Bush from her husband as a birthday gift in 2004. 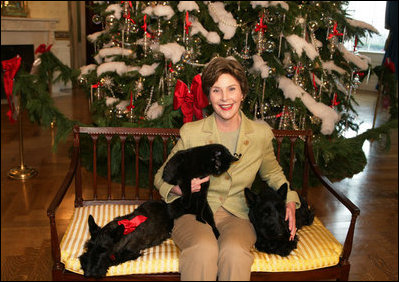 Miss Beazley was named after a character in the children’s book The Enormous Egg. Perhaps Barney liked her because she was actually Barney’s niece. Anyway the feeling was mutual and Miss Beazley was a great friend to Barney. After Barney’s death from cancer at age 12 Laura Bush said, “Miss Beazley really seems to be sad… She seems a little lost looking for Barney.” After her own fight with cancer, Miss Beazley died in May 2014. George W. Bush gave Miss Beazley credit for never holding a grudge against Barney even though he got so much of the nation’s attention.