Most people remember Richard Nixon for being the only President of the United States to resign from office. Yet when I was researching this blog post, I realized that I knew almost nothing about his childhood and education. Like most leaders, his early experiences shaped what he did later in life.

Richard Nixon was born in 1913 in Yorba Linda, a small town east of Los Angeles. His father Frank planted lemon groves, but these failed and the family moved to Whittier, California. Here Frank ran a grocery store and gas station. Richard Nixon said of his childhood, “we were poor, but the glory of it was we didn’t know it.”

Although Frank and Hannah Nixon had five children, they lavished most of their attention and what little money they had on their oldest son, Harold. They bought Harold a Boy Scout uniform but couldn’t afford to get one for Richard. Richard and his other brothers stayed home while Harold was sent to a Christian boarding school in Massachusetts.

Harold and Richard were opposites. Harold was popular with other kids and girls “swooned over him.” In contrast, Richard felt uncomfortable around people he didn’t know well and the other boys teased him. Instead of fighting the bullies, Richard kept his anger bottled up. Realizing he would never be as popular as Harold, Richard threw himself into his schoolwork. He became his grammar school’s valedictorian and joined the debate team in high school. Richard also had big dreams. His grandmother gave him a framed portrait of Abraham Lincoln, which he hung over his bed. 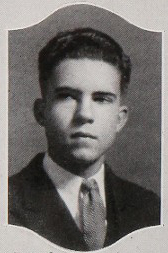 Photo of Richard Nixon as a senior in high school, 1930

While Richard Nixon could literately look up to Abraham Lincoln, his parents’ volatile personalities had the most influence on him. Frank Nixon had a terrible temper. Richard and his brothers were rapped on the head by their father at various times. At his grocery store, Frank subjected customers to his conservative political opinions whether they wanted to hear them or not. He also blamed others for his bad luck.

In contrast, Richard’s mother, whom he called “a saint,” smiled and bottled up her frustrations. Hannah Nixon had a gentle voice but punished her children by not speaking to them. Though deeply religious, she was not affectionate.

As a result of his childhood experiences, Richard developed a dislike of conflict and a sense that he was not good enough, especially when compared with Harold. When Harold died of tuberculosis in 1933, Frank Nixon said, “Why is it, that the best and finest of the flock has to be taken?” Richard, as the second oldest son, would always be trying to live up to his dead brother’s potential.

After high school, Richard was offered a scholarship to Harvard but ended up at Whittier College to save money on living expenses. Determined to distinguish himself, Richard participated in school debates and was eventually elected president of the student body. While he excelled in debates and in his studies, Richard remained somewhat of a loner. One former classmate recalled that “I don’t think he had anybody you would call a close friend.” He had an on and off relationship with a young woman which she described as “stormy.” Even she said she didn’t feel that she really knew him.

At the end of college, Nixon received and accepted a scholarship to Duke University Law School. He told his girlfriend that he hoped to do something important with his life. Clearly, Richard Nixon was ready to make his mark on the world.

Being Nixon: A Man Divided by Evan Thomas

“WANTED: young, skinny, wiry fellows, not over eighteen. Must be expert riders, willing to risk death daily. Orphans preferred. Wages $25 a week. Apply, Central Overland Express, Alta Bldg., Montgomery St.” This ad was placed in a San Francisco newspaper in March 1860 when the Pony Express was first hiring riders. Despite the risks involved, hundreds of young men applied to deliver mail on the Pony Express.

Since the Gold Rush of the mid-1800s, more people moved out west to California. The problem: there was no fast way for them to get mail from other parts of the country. William Russell, a partner in one of the largest freighting companies that sent supplies to the West, had an idea. He would generate publicity for the company by starting a “horse express” that promised to deliver mail in ten days from St. Joseph, Missouri to Sacramento, California. He planned to have a chain of riders relaying mail from one station to the next with one rider coming from each direction. Russell set up home stations where riders could rest and relay stations where they changed horses. He sent supplies to each station along the route, bought horses and paid riders with company money.

Riders on the Pony Express had to meet certain requirements. Most riders were under one hundred pounds and were similar in size to horse jockeys today. The lighter the rider, the faster the horse could go. The company preferred to hire orphans so families would not complain if their sons died trying to deliver mail. Pony Express riders were advised never to start a conflict with bandits or Native Americans. They should flee on their horses whenever possible but could use a revolver as a last resort to protect themselves and the mail.

Despite the images of Pony Express riders shooting Native Americans and having adventures popularized by Buffalo Bill’s Wild West Show and dime novels, the life of a Pony Express employee was far from glamorous. As rider William Campbell said, “Riding express had more hard work than fun in it.” The weather often was a rider’s worst enemy. Campbell recalled his route through Nebraska: “Once I spent twenty-four hours in the saddle carrying the mail 120 miles to Fairfield with snow two or three feet deep and the mercury around zero. I could tell where the trail lay only by watching the tall weeds on either side and often had to get off and lead my horse.” Though the men were paid well by the standards of the day, the physical toll of riding long distances and in bad weather led many riders to quit.

Employees of the Pony Express were in greater danger during a war between white settlers and the Native American Paiute tribe, though station masters died more frequently than riders who often fled on their speedy horses. The Paiute War caused the Pony Express to shut down for about one month. It resumed service after the United States Army settled the conflict.

Regardless of their hardships, the riders were determined to get the mail through no matter what. Even on the first run of the Pony Express on April 3, 1860, the riders got the mail to California in the promised ten days. Due to the more widespread use of the telegraph and the railroads, however, the Pony Express only lasted for a year and a half.