Next month on March 17, many people in Ireland and the U.S. will observe St. Patrick’s Day. You’ll probably see people wearing hats, shirts, and pins with shamrocks on them. But do you know how the shamrock became a symbol of St. Patrick’s Day?

According to legend, Saint Patrick, after whom the holiday named, used shamrocks as a symbol of Christianity. St. Patrick converted many Irish people to the Christian religion around 432 A.D. Depending on what legend you believe, St. Patrick may have used the shamrock’s three leaves to explain the concept of the Trinity to the Irish. He pointed out that although
the shamrock has three leaves, it is still one plant. Similarly, the Christian god is made up of three persons (The Father, Son, and Holy Ghost).

Whether or not the story is true, shamrocks resemble the Christian cross, especially when drawn in the Celtic style. The similarity to a cross and the sign of spring remain two reasons why the shamrock is still worn today.

In ancient Ireland, the shamrock was a sacred symbol. The three leaves on the shamrock made it really special because people at the time believed that three was a magic number. Good things supposedly happened in threes. If one good thing happened, a person could expect two more. Historians discovered that the Celts also used the shamrock to help them grow crops. The shamrock’s three leaves represented three goddesses. By burning the leaves and spreading the ashes over their fields, farmers expected to grow many crops. In addition to the number of leaves on the shamrock, it also served as a sign of the coming spring.

In the nineteenth century, the Irish used the shamrock as a symbol of rebellion against English rule. Wearing a shamrock during this period was a serious statement of Irish national pride and was punishable by hanging.

The Irish also developed the custom of “drowning the shamrock.” Families with servants put shamrocks in a bowl and covered them with Irish whiskey. When the family finished drinking, the remainder of the whiskey was given to the servants. Despite the custom of drowning the shamrock, St. Patrick’s Day is not dedicated primarily to drinking in Ireland. Instead, people spend the day visiting family and attending church services.

Everyone knows that Valentine’s Day is a holiday when people show love family and friends. Some people send cards, candy or flowers to each other. But do you know how Valentine’s Day got its name?

The ancient Romans dedicated February 14 as a day of love. On that day, Romans honored Juno, the goddess of women and marriage. If they praised Juno, Romans believed that the goddess would help young men and women find their future wives and husbands. On February 14, the boys each drew a girl’s name from a container. When all the girls’ names were picked the next day, each boy paired up with the girl whose name he chose for another holiday to honor the god Lupercus. Older adults hoped that each pair of boys and girls would fall in love during the festival.

As Christianity spread across Europe, church officials didn’t want to honor the Roman gods, but they knew that the yearly celebration of love was very popular. In A.D. 486, Pope Gelasius replaced the Roman holiday with another festival. He named it after the Christian saint of love, Saint Valentine. 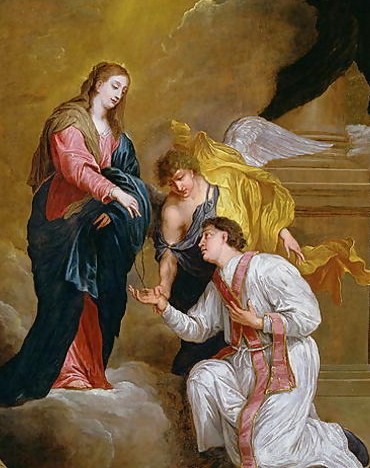 Saint Valentine is a mysterious figure. Some historians think that at least three different people in history shared the name Valentine. One legend says that Valentine was a Christian priest during the reign of Emperor Claudius II. Claudius had a hard time getting soldiers to fight his wars, so he forbid young men from marrying. Valentine disagreed with the emperor and performed secret marriages. When Claudius discovered Valentine’s actions, he threw the priest in jail. In this legend, Valentine was killed on February 14.

In another legend, Emperor Claudius wanted everyone to pray to the Roman gods. Valentine refused because he believed in the Christian religion. Claudius imprisoned Valentine for his disobedience. While Valentine was in jail, he fell in love with the prison guard’s blind daughter and gave her a note before he was killed. Suddenly, the girl could see again.

As time passed, people associated St. Valentine with lovers, and his day became a time when people hoped to find their sweethearts.