As President Garfield lay dying, his vice-president Chester Arthur tried to avoid being seen in public. Arthur was initially blamed for Garfield’s death. Of course it didn’t help that Garfield’s killer wrote to congratulate him on becoming president!

In addition, Arthur and Garfield had a strained relationship. As vice-president he opposed Garfield’s defiance of Roscoe Conkling. Conkling had helped Arthur get a post as New York’s Customs Collector during the Grant administration. While Arthur was never charged with corruption, he cheerfully allowed it. When he was fired from his post by the reform minded President Hayes, Arthur became the president of New York’s Republican committee. 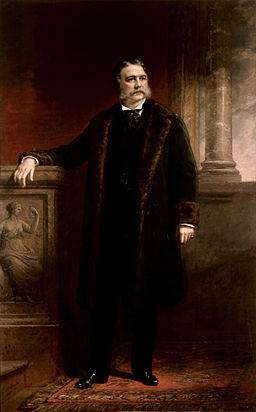 Despite the rumors Arthur didn’t want to become president. He genuinely wept when Garfield died. The job bored him so much that he lived for fishing and vacations.

Yet Arthur was determined to clean up his image. He decided to break with his old cronies and actually expanded civil service reform. He also took an interest in preserving the country’s natural resources and was especially concerned with deforestation in the West.

One of the few things Garfield enjoyed about being president was entertaining. He sold almost anything in the White House in order to pay for redecorating projects and hired Tiffany’s to help. Once he thought the place was presentable, the president held black tie dinners every week. The dinners included up to 14 courses and various wines. He had no hostess, though. His wife died before he became president.

Arthur could not run for re-election because he had contracted Bright’s disease. He died soon after leaving office.