If you celebrate Easter, you’re probably planning to dye Easter eggs this month. But do you know how the egg became a symbol of Easter?

Eggs are often associated with new life. Ancient civilizations believed that the world began with the cracking of an enormous egg. The ancient Egyptians, for example, thought that the sky and the earth produced the egg that created
the universe. People in ancient Persia, Greece, and China gave each other gifts of eggs during spring festivals to celebrate the new growing season.

Since people did not always write things down in ancient times, we can’t know for certain whether the idea of Easter egg came from an older civilization. Supposedly eggs were dyed and eaten at the ancient spring festivals. The first record of the term Easter egg didn’t show up in Western European books until the fifteenth century. Some historians believe that missionaries living in Persia or Greece brought the tradition of coloring eggs to the West.

During the Middle Ages, no one ate meat during the winter. The people were both trying to conserve food and observe the custom of fasting for Lent. In addition to giving up meat, they also didn’t eat eggs. Instead, they saved their eggs and brought them in baskets to church, where a priest blessed the eggs.

When the Easter holiday arrived, people were allowed to eat eggs again. This was considered such a treat that eggs were given as presents. Children sometimes received an egg for Easter from their parents, or they went from house to house begging for eggs like America’s trick-or-treaters on Halloween. 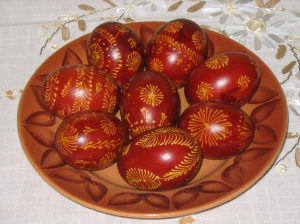 Decorating Easter eggs became an art, especially in Eastern Europe. Many of the eggs were dyed red to symbolize the blood of Christ, but other colors such as yellow appeared, too. In Poland and Russia, girls made elaborate designs on their Easter eggs. Some popular symbols included a sun for good luck, a deer for good health, and flowers for love and beauty. Other eggs had crisscrossed lines or checkerboard patterns.

Immigrants from Europe brought the art of decorating Easter eggs with them when they settled in America. Games involving Eater eggs that were popular hundreds of years ago are still played today. One games is the Easter egg roll. In this game, the goal is to roll as many eggs as possible without cracking the shells. The White House in Washington, D.C. hosts an annual Easter Egg Roll.

The first White House Egg Roll started during James Madison’s presidency. At the time, it was held on the grounds of the Capital. One account of the event states, “at first the children sit sedately in long rows; each has brought a basket of colored hard-boiled eggs, and those on the upper terrace send them rolling to the line next below…and as the sport warms, those on top who have rolled all the eggs they brought finally roll themselves, shrieking with laughter.”

The game was discontinued in 1878 because of the wear and tear on the Capital lawn, but started again during the presidency of Rutherford Hayes. Hayes’ wife allowed the children to use the White House lawn. With the exception of the Civil and World Wars when the game was not held, the White House Egg Roll became a tradition that remains to this day.