In the 1800s, thousands of families traveled to the western territory of the United States. Many traveled in covered wagons from Missouri to Oregon or California. A religious group called the Mormons left Iowa for Utah. The U.S. government’s Homsetead Act encouraged families to move with promises of free land. By the 1840s, Oregon fever gripped the nation and people left on the Oregon Trail to become homesteaders. Although pioneer kids couldn’t bring all their old toys with them, they found new ways to play when they arrived in their new homes. 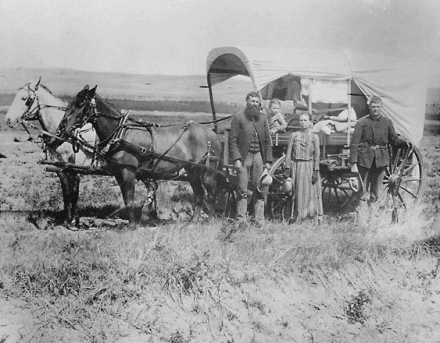 Like girls today, nineteenth century girls liked to play with dolls. If a girl’s family had money, she might get a store bought doll made of porcelain or wax. Bettina Bush, the daughter of a doctor in North Dakota, played with several dolls that wore colorful dresses. She and her friend, Mary Margaret French, loved playing in the cellar with their “children.” Most pioneer families could not afford such expensive toys so girls played with dolls made from rags or cornhusks. A good imagination helped a lot. Even if a girl got a nice doll, she often couldn’t get other toys. For example, one young girl built her doll a house out of paper.

Boys on the frontier often tried to copy the tasks that their fathers did. Two young boys in Montana built a small house out of the scraps left over from the family’s cabin. A popular game for boys out West was playing horse. If a family didn’t have a live horse, the boys improvised. Lorin Brown said, “Cupping small milk cans in our hands, we lived on all fours for three or four years. We were the bucking bronc, the race horse, and the fancy saddled gate horse.”

Both girls and boys enjoyed the farm animals that their families kept, even if the animals meant more chores. A young girl from North Dakota and her brothers looked forward to the arrival of new colts and calves on the family farm so “we could pet them and spoil them.” Other children made pets out of baby chicks and lambs. Even full-grown chickens were used in games. One brother and sister pair from Wyoming practiced “roping the chickens” the way a cowboy roped cows.

When they had to play indoors, frontier children read books and put on theater shows. Mormon children in Utah had a theater built for them where they could sing and dance while their families watched. Girls and boys also took advantage of public libraries in their communities whenever possible. Though favorites included Robinson Crusoe, many children secretly read books their parents didn’t like. These books had titles like Peck’s Bad Boy.

Play sometimes depended on the location where kids lived. For example, kids in Wyoming and Montana towns used hills for sled and toboggan runs. Kids who grew up near railroad tracks spent hours playing engineer or conductor. Though they didn’t always have much money for toys, frontier children still managed to have fun.