Taylor was best known as a general rather than a politician. In fact, he had never voted in a presidential election. That was somewhat understandable since he was usually busy fighting battles. He earned his nickname “Old Rough and Ready” during the Seminole War in Florida. His men admired the fact that he fought beside them on the front lines. They also liked his independent spirit. Instead of a uniform Taylor wore a straw hat and civilian clothes.

At age sixty-one he led troops into Mexico in the fight for Texas. A new invention, the telegraph, was used for the first time to provide daily progress of the war. News of Taylor’s victories in the Mexican American War made him very popular. Despite or perhaps because his opinion on most issues was unknown, the Whigs chose him as their candidate in 1848.

Since Taylor was a slave owner, southerners expected him to support the expansion of slavery in the new territories of California and New Mexico. Taylor surprised almost everyone. He resolved to leave slavery in states where it existed but opposed its expansion. When Congressmen tried to work out a compromise, Taylor threatened to veto it. He said of the Union, “Whatever dangers may threaten it, I shall stand by and maintain it.”

Taylor never had a showdown with Congress. After a July 4th celebration he drank some tainted milk and died days later of gastritis. 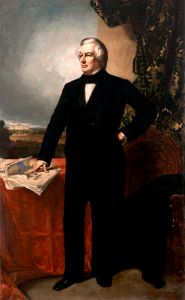 Taylor’s vice-president Millard Fillmore took office after Taylor’s death. Fillmore grew up in extreme poverty. He was mostly self-educated, but he was encouraged by a schoolteacher named Abigail to study law. Later, Abigail became his wife. Ironically, he was chosen to balance the Whig ticket as a non-slave owner from New York. Yet, unlike Taylor, he was prepared to allow the spread of slavery.

He supported the Compromise of 1850 under which California was made a free state while the New Mexico and Utah territories were left open to slavery. Slavery was abolished in the District of Columbia, but a new fugitive slave law offered $10 to anyone who handed over an African-American to federal authorities. Although Fillmore disliked slavery, he thought that states and not the federal government should decide where it would or would not exist.

After the passage of the Compromise of 1850, Fillmore thought the slavery issue was resolved. Yet both North and South were dissatisfied with the Compromise. The Whigs chose not to nominate Fillmore in the next election. Fillmore looked forward to a happy retirement with his beloved Abigail. Sadly she died before he left Washington.

Fillmore lived for over twenty years after his presidency. He even ran for the office one more time as a third party candidate but lost. During the Civil War he supported the Union. Nevertheless, some never forgot his support of the Fugitive Slave Law. After President Lincoln’s assassination a mob tried to paint Fillmore’s home black.