Queen Nefertari was Ramesses II’s first and favorite wife. Archeologists know that she was not born a princess, but this wouldn’t have bothered Ramesses since his father Seti I became pharaoh after his birth. During their twenty or so years of marriage, Nefertari had six children. Since Ramesses II reigned for 66 years, however, none of these children outlived their father. Fortunately, he had other wives and over 100 children. Yet none of these family members got the same recognition as Nefertari.

Nefertari is shown alongside her husband during royal ceremonies but doesn’t take a particularly active role. No records exist that describe her personality. We do know that Ramesses II favored her, however. She was sometimes referred to as Mistress of Upper and Lower Egypt. Usually the king called himself ruler of the two lands of Egypt and did not share the title with his queen. 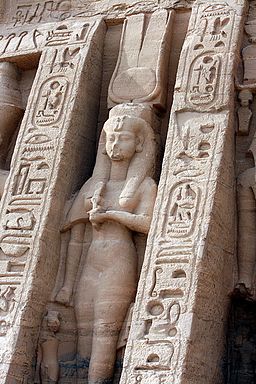 The other reason we know Ramesses was especially fond of her was because of the monuments he dedicated to her. At the Lesser Temple of Abu Simbel in Nubia, there are four enormous statues of Ramesses and two of Nefertari. Unlike temples given to other queens, Nefertari’s statues are of the same size and scale as her husband’s. Just in case anyone doubted Ramesses’ affection for her, he had the temple inscribed: “Ramesses II has made a temple, excavated in the mountain, of eternal workmanship…for the chief Queen Nefertari beloved of Mut…Nefertari…for whom the sun shines.”

In addition to the temple at Abu Simbel, Nefertari has one of the most elaborate and beautifully decorated tombs in the Valley of the Queens. The Valley is west of Thebes, which was Egypt’s capital during Ramesses II’s reign. The sarcophagus that held Nefertari’s body and her grave goods are long gone, but the paintings on the tomb walls are stunning. The images in the tomb are only meant to ease Nefertari’s passage into the afterlife. There are no details about her life on earth. In fact, the paintings were never meant to be seen by humans after Nefertari’s burial. 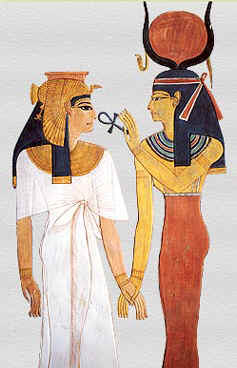 Various gods and goddesses are shown leading Nefertari on her journey to the afterlife. Nefertari’s image is youthful. She wears a flowing white gown with pleats tied at the waist. On her head is a crown with golden feathers which she wears on top of her dark wig. In one scene, she is led by hand by the goddess Isis to the god Khepri, who symbolized the sun. Another wall shows Nefertari bringing offerings of food to Osiris (god of the afterlife) and Atum (the creator god). The deities assure Nefertari that a place has been prepared for her in the afterlife.

In a later scene, several gates that lead to the underworld are shown. The nearby hieroglyphs function as a sort of cheat sheet, providing the names of the gates and their guardians so that Nefertari will pass though them easily. The journey to the afterlife is a difficult one, but Nefertari is ultimately successful.

Before the name ISIS (an acronym for Islamic State of Iraq and Syria) became synonymous with public executions and terror, a goddess with the name Isis was popular in ancient Egypt. The ancient Egyptian goddess Isis represented many positive values, such as protection, healing, and the importance of family. Clearly, she had nothing in common with the ISIS we read and hear about today.

According to ancient Egyptian mythology, Isis was the wife and sister of the god Osiris. Osiris ruled Egypt, and Isis supported his endeavors. Unfortunately for the couple, Osiris’ brother Seth wanted his brother’s power so badly that he murdered and then dismembered Osiris. Isis and her sister Nephthys mourned Osiris, but they did not sit around crying for long. Instead, the two women travelled to the ends of the earth to find Osiris’ remains and revive him: “Rise up, Osiris, for Isis has your arm and Nephthys your hand.” After Osiris’ resurrection, Isis conceived a son with him whom she named Horus. Osiris left Isis to care for their son and became the god of the underworld. 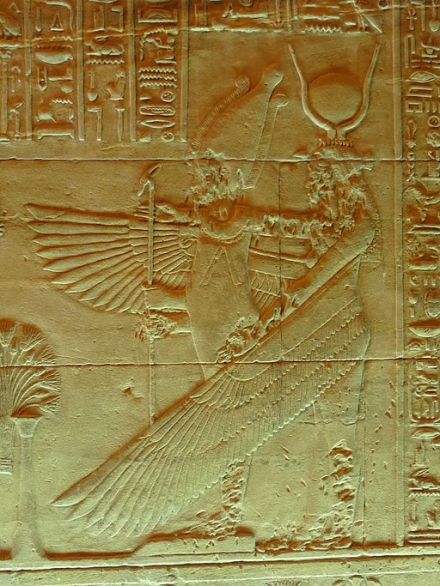 Proving that a woman’s work is never done, Isis now had to hide her son from the evil Seth. She proved to be a wonderful and protective mother. For example, she healed Horus when a scorpion stung him. Isis continued to watch over her son until he was old enough to fight Seth. Horus successfully avenged his father’s death and became king of Egypt, but he couldn’t have done it without his mother.

Ancient Egyptians associated Isis with motherhood, especially as the mother of Egyptian kings. Early Pyramid Texts state “the king drinks milk from his mother Isis.” At first the goddess could only be called upon to help Egyptian pharaohs, but later the nobility and even commoners could ask Isis for assistance. In a time with high mortality rates, ancient Egyptian mothers often recited spells that included the goddess in the hope that Isis would heal their sick children.

In addition to her role as a mother, Isis also served as the protector of the dead in the afterlife. She was often depicted on the sides of royal coffins with winged arms. With the wings of the goddess to carry their deceased loved ones to next world, Egyptians felt comforted even though they mourned the dead.

A faithful wife, loving mother, a healer of children, and a comforting presence to those who mourn—all qualities that the ancient Egyptians gave to their Isis. Unfortunately, the organization that now uses her name stands for none of these admirable traits.

Daughters of Isis by Joyce Tyldesley

The Complete Gods and Goddesses of Ancient Egypt, Richard Wilkinson

The pharaohs decided how much we know about their queens because men commissioned the building of monuments like temples and tombs. Unfortunately, most wives did not have much written about them. Yet the Egyptians left us with a blueprint for the perfect Egyptian queen in the story of their goddess Isis and her husband Osiris. After her husband’s brother killed Osiris so he could steal the throne of Egypt, Isis searched for Osiris’ body. She brought him back to life long enough so they could have a son named Horus. Isis then protected her son from her jealous brother-in-law until he was old enough to reign as pharaoh.

Like Isis, Egyptian queens were supposed to support their husbands and bear children. Yet in times of crisis, they could be called upon to act on behalf of their husband or son. Some queens ruled their country temporarily while their husbands were away on military campaigns. Others stepped in as Queen Regent for a son who inherited the throne at a young age. Mainly, however, a queen’s role was defined by her relationship with the king.

Following the tradition of Isis and Osiris, all pharaohs were expected to marry.  Pharaohs married wives that were chosen for them, but there is no record of how they were picked. Many came from the royal family so the king would have a wife who was trained to help in a crisis and who was supposedly trustworthy. Queens like Nefertiti and others were born commoners, however, so the idea of a non-royal wife for a pharaoh was apparently acceptable. Perhaps commoners received acceptance because in the story of Isis and Osiris, relatives were not always loyal.

In ancient Egypt, the word queen is translated as King’s Wife. Yet Egyptian pharaohs were polygamous, meaning they had more than one wife. Polygamy demonstrated the wealth of the pharaoh and provided insurance that he would have an heir. Only one wife, known as the King’s Great Wife, would be featured in official records. She hoped to earn the title King’s Mother by giving birth to a son who would become pharaoh. If she did not accomplish this, another lesser wife might receive the title.

While she lived, however, the King’s Great Wife served as the embodiment of Isis—the perfect complement to her husband who was thought to be half god and half human. Together, she and the king would serve the gods and rule their people, keeping order in their kingdom.

Egyptian goddesses portrayed women’s passive role in the community. Each goddess, regardless of her popularity or the power she sometimes exerted, reinforced the Egyptian female ideal who bore children and obeyed her husband. One goddess who fit the description of the ideal woman was Isis. The myth of Isis says that when the god Seth betrayed her husband Osiris and tore him to pieces, Isis and sister Nephthys gathered his remains and made Osiris whole again. Isis conceived a son named Horus with the resurrected Osiris. As a mother and a wife, Isis was particularly important to women. Isis was frequently invoked to protect children because she used her magical powers to hide her newborn son Horus in the marsh away from the jealous Seth. Isis and Horus were also frequently called upon to ensure a safe delivery for a woman in labor. Prayers and spells such as “For speeding up the child-birth of Isis” could be recited during a difficult delivery. Clearly Isis must have possessed great magical powers to resurrect her husband and protect her child, yet she still conformed to the ancient Egyptian feminine ideal.

Although occasionally less benevolent than Isis, the goddess Hathor also acted the part of the model Egyptian woman. Hathor was the goddess of love and music who was often depicted as a cow because of her role as a nurturer and provider. The importance of Hathor was emphasized by her identification with royalty. The pharaoh could be identified with many gods, but he was often referred to as the son of the sun-god Re. As his wife, the queen wore the sun disc and horns of Hathor, who was the daughter of Re. Though the queen was the woman most directly associated with Hathor, ordinary people could call on Hathor for protection. One mother invoked Hathor to be present at a birth: “Rejoicing, rejoicing in heaven, in heaven! Birth giving is accelerated! Come to me, Hathor, in my fine pavilion, in this happy hour.” Hathor’s powers, like those of Isis, were used to protect women. Although these powers were vast, they never directly impacted the male worlds of politics and war.

The ancient Egyptians viewed many of their goddesses as potentially good as well as potentially evil. Hathor could be either benevolent or destructive. The popularity of the nurturing version of Hathor reflected society’s idealized woman, but the Egyptians realized that even the nurturing mother could become violent. Goddesses were not always cast in traditionally feminine roles.  Hathor’s destructive counterpart was Sekhmet, the lion-headed goddess of war and sickness. When the god Re wished to destroy mankind he sent Sekhmet to carry out his wish. He later changed his mind but Sekhmet refused to stop, relishing the destruction she was causing. Re checked Sekhmet by getting her drunk and mankind was saved. Significantly, a male god stops Sekhmet’s plans, suggesting that regardless of her powers, no woman can override the wishes of a man.