In an opinion piece, The Jewish Journal says that since Mr. Trump asked a descendent of Holocaust survivors to write the statement, it must be acceptable. It is possible that the original draft might have mentioned Jews and Mr. Trump simply decided not include them in the final statement. Yet historically what presidents say, or fail to say, does have consequences.

For example, in the 1940s some of FDR’s staff members urged him to make statements emphasizing the importance of rescuing Jews, but he would either have those words buried in a later paragraph of his speech or chose not to use them at all. FDR’s prevarications ensured that the rescue of Jews would not be a priority. 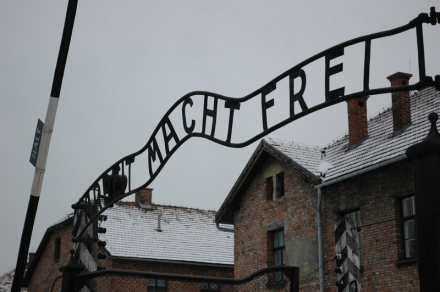 Even when nearly all the Jews had been murdered, FDR preferred to use the term “victims of enemy oppression” rather than refer to Jews specifically when he created the War Refugee Board, an agency that was designed to help victims of the Holocaust from 1944-1945. Most of the victims, though certainly not all, were Jews.

The Jewish Journal suggests that Mr. Trump deserves an apology from his critics. After all, he is not Jewish, so how could he be expected to know that more Jews died in the Holocaust than any other group, or that the Nazis employed “unprecedented resources” to “identify and annihilate the Jews?” Well, I am not Jewish, and yet I know these facts.

I might be more willing to give Mr. Trump the benefit of the doubt if he had shown any love or tolerance for any other group of people than rich white men during his campaign and thus far, his presidency. Yet he fails to denounce the Ku Klux Klan and threatens to create a Muslim registry. These are not hopeful signs. Should Mr. Trump change course, however, I would be happy to acknowledge it.

Statement by the President on International Holocaust Remembrance Day January 27, 2017.