The Island of Sea Women is a story of friendship, heartache, and forgiveness. Young-sook and Mi-ja are childhood best friends. As they grow up on Jeju, an island that is now part of South Korea, Young-sook’s mother teaches them to dive. The girls became haenyeo–female divers who catch sea creatures like abalone, sea urchins, and even octopus to sell and help feed their families. Experienced haenyeo have no oxygen tanks but can stay submerged in the sea for twenty or more meters.

Lisa See’s novel covers both the friendship of the two girls and the history of Jeju from 1938 to 2008. Young-sook is the daughter of a respected haenyeo chief, but Mi-ja is an orphan. Though Young-sook’s mother shows Mi-ja kindness, others in their village do not. In 1938, the Japanese occupy Korea, and Mi-ja’s father worked for the Japanese. Thus Mi-ja is marked as a collaborator–a curse that haunts her throughout her life.

Early on, the girls learn the dangers of the sea. As Young-sook’s mother explains, “Every woman who enters the sea carries a coffin on her back. In this world, in the undersea world, we tow the burdens of a hard life. We are crossing between life and death every day.” Both Mi-ja and Young-sook will lose people they care about in the sea.

In the late 1940s, however, the young women learn that being on land can be equally dangerous. Young-sook and Mi-ja are now both married and have children. As they are living their lives, the Japanese are replaced by American occupiers. Eventually the desire for Americans and the Koreans they’ve placed in charge to root out communism causes unimaginable tragedy for the people of Jeju, and the friendship of Young-sook and Mi-ja is tested like never before. 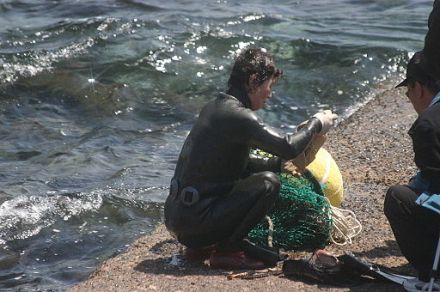 I enjoyed learning about the non-traditional gender roles on Jeju. Men stayed home with the children while women dove or worked in the fields to gather food. As Young-sook’s daughters points out later in the book, in some cultures Jeju men would be called wives. I had not heard about the haenyeo before reading this book and have so much respect for their skills. Lisa See’s beautiful descriptions of the world underwater made me feel as though I was right there with the divers.

If you’ve read any of her other books, then you know that See is an expert at depicting female relationships. Young-sook and Mi-ja stand by each other through sorrows, such as the death of Young-sook’s mother early in the novel. Yet the events of history and their own actions/inactions begin to tear them apart. See explores the importance of forgiveness and what each woman loses without it.

Though I thoroughly enjoyed learning about Jeju and its history of strong women, I would not recommend this as a relaxing read. Pick up The Island of Sea Women if you are interested in the subject matter, but keep in mind that history is often ugly.