James Garfield was raised by a single mother in Ohio (his father died when he was two years old). He managed to save enough money to get through school. After college Garfield had various jobs as a preacher, professor, and college president. Garfield was never satisfied with any of these occupations or with having just one girlfriend. He courted his future wife Lucretia for so long that she was ready to give him up, but he finally grew into a devoted family man.

When the Civil War began Garfield served as the country’s youngest major general. President Lincoln convinced him to resign his commission, however, when his home state elected him to Congress. Garfield never lost an election and served for nearly two decades.

During the 1880 Republican convention Garfield’s name was put forward, though he tried to object. In a crowded field that included former President Grant, Garfield won the nomination. With the help of powerful Republican Senator Roscoe Conkling he narrowly won the presidency, too.

Ironically, Garfield and Conkling were soon pitted against each other in an argument over federal appointments. Though Garfield had nominated some of Conkling’s friends for other positions, he appointed one of Conkling’s rivals to the New York Customs House.

Garfield surprised Conkling and almost everyone else when he refused to back down. “This…will settle the question whether the President is registering clerk of the Senate or the Executive of the United States,” he said. It seemed that the country had finally found a strong chief executive.

Only a few month into his presidency, a young man who had unsuccessfully sought a position in the government shot Garfield. Garfield lingered for months. An early air conditioning unit was installed in the White House to keep Garfield cool in the summer. Alexander Graham Bell even tried to find the location of the bullet, which remained inside the president, with a new electrical invention. After being moved to the Jersey shore, however, Garfield died. 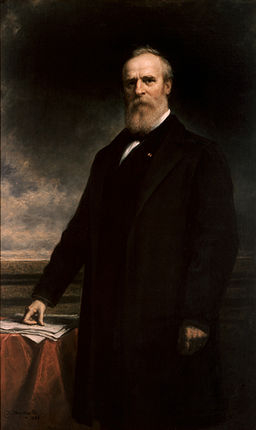 Rutherford B. Hayes is the first in my new series of frequently forgotten U.S. Presidents.

Like President Grant, Hayes had personal integrity, but his presidency was tainted by the very corruption he deplored. During the 1876 presidential election Hayes’ Republican supporters disputed the electoral votes in a few southern states. Republicans promised that Hayes would withdraw federal troops in those states if elected, which he did.

The southern states did not keep their promise to grant civil rights to blacks, however. Though he made other reforms, Hayes’ troop withdrawal delayed the civil rights movement until the 20th century.

The circumstances of his election caused some to label Hayes as “His Fraudulence.” Hayes did gain some support from the public by promoting civil service reform. He signed an executive order that stated that people in public office would be fired only in the best interest of the government regardless of their political affiliations. Hayes followed through on this by firing future Republican president Chester Arthur who used his position at the New York Customs House to help other Republicans.

Though he had pledged to serve only one term, he couldn’t have run again if he wanted to because so many Republicans were angered by his efforts to root out corruption. He managed to accomplish some changes, however.

He had the first telephone installed and was the first president to have a college-educated wife. He and “Lemonade Lucy” banned alcohol from White House dinners. After leaving office he became one of the most active ex-presidents, supporting causes like black education and prison reform.

In 1959, Hawaii officially became America’s fiftieth state. Before any Americans arrived, however, Hawaii was a free nation governed by one ruler. Hawaii’s last monarch, Queen Liliuokalani, sought a peaceful resolution with America but also wanted to keep her title. Instead, she lived to see her nation taken over by another country.

As early as age four, Liliuokalani felt the influence of Americans in Hawaii. In 1842, she attended a school for Hawaiian royal children, where she received lessons from missionaries from New England. Some of the lessons, such as English and music, were useful to Liliuokalani when she became queen.

The missionaries, Amos and Juliette Cooke, did more than insist that the children do homework, however. At the Royal School, Liliuokalani learned to pray to one god instead of many. No one at the school called Liliuokalani by her real name. Instead, she was given the Christian name Lydia. The Cookes also made the children wear more clothing than they were used to out in the warm climate of Hawaii, and they ate less. Liliuokalani wrote later, “It seems to me that they failed to remember that we were growing children. A thick slice of bread covered with molasses was usually the sole article of our supper.”

At age sixteen, Liliuokalani married an American named John Dominis. He served as an advisor to Hawaii’s king. King Kamehameha V noticed young Liliuokalani’s musical talent and asked her to write a national anthem for Hawaii. She wrote it in both Hawaiian and English. It read in part, “Grant Thy peace throughout the land/O’er these sunny, sea-girt Isles/Keep the nation’s life O Lord/And upon our sovereign smile.”

When King Kamehameha died, Liliuokalani’s brother became king. By the 1870s, more Americans came to Hawaii. These Americans were businessmen, not missionaries. They bought Hawaiian land and grew sugarcane on it. By shipping sugarcane around the world, Americans in Hawaii became rich.

Liliuokalani’s brother, King Kalakaua, wanted native Hawaiians and Americans to get along. To accomplish his goal, Kalakaua made a treaty with President Grant. The treaty said that American sugar growers could ship their sugar without paying taxes, and that only the United States could use Hawaii’s harbors. Kalakaua thought the treaty would create better relations with Americans, but it just made Americans richer by helping them stockpile their money. When her brother signed away Hawaii’s harbor, later known as Pearl Harbor, Liliuokalani wrote, “King signed lease of Pearl river to U. States for eight years. It should not have been done.”

One day, a group of Americans stormed Ionlani Palace where the king lived. They had weapons and demanded that he sign a new constitution that gave Americans the power to make Hawaii’s laws. A few years later, King Kalakaua, who had become only a figurehead in Hawaii, died with no heir.

His sister Liliuokalani was crowned queen. She worked hard to return her country back to native Hawaiians. She wrote a new constitution that gave her the right to rule. The Americans rejected it. When an American named Sanford Dole took over as Hawaii’s leader, she appealed to President Cleveland for help. Cleveland supported Liliuokalani, but failed to convince Dole to step down. Some of Liliuokalani’s loyal supporters in Hawaii tried to overthrow the new government, but they only managed to imprison themselves and their queen.

The new government locked Liliuokalani away for eight months, during which she was forced to sign away her rights to the throne. When she was released in 1895, she traveled the United States, unsuccessfully trying to gain support for Hawaii’s independence from America.