In 1701, a Dominican priest named Francisco Ximenez was allowed by the Maya to see something no other European had ever laid eyes on. They showed him a copy of their creation story, known as the Popol Vuh. The document had been hidden in the town of Chichicastenago in Guatemala. Ximenez made a Spanish translation of the Popol Vuh so Europeans could read it.

The document Ximenez saw was written between 1554-1558. Before the anonymous Mayan authors wrote it down, Mayans told the creation story orally. Here is the basic story of the Popol Vuh.

In the beginning, there was nothing but stillness. There were only a group of gods called Heart of Sky, Newborn Thunderbolt, Sudden Thunderbolt, and the Plumed Serpent. These gods went to a pair of other gods named the Maker and Modeler–a pair of male and female creators. Maker and Modeler created the earth through the power of their words. They created land, mountains, trees, rivers, and plants. The gods weren’t completely satisfied, though. They wanted to create beings that could worship and thank them for what they created.

First, the gods made animals, but then realized that animals couldn’t speak to honor the gods with words. Next the gods tried making humans out of mud. The humans could speak but they were stiff and melted in the rain. The gods decided to send a flood upon the mud people to destroy them. On their third attempt, the gods made wooden people. These humans had great strength and could speak but they treated the animals cruelly. As revenge, the gods allowed the animals to eat the wooden people. The few wooden people who survived hid up in the trees and became monkeys.

While the gods were trying to create humans, the earth was still without a sun or a moon. One day Seven Macaw, a large bird with shining feathers and jeweled eyes, went up into a tree and claimed that he was the sun and the moon. The Hero Twins, Hunahpu and Xbalanque, thought Seven Macaw had too much pride. They used their blow guns to shoot him and Seven Macaw fell from the tree with a broken jaw. (This image is portrayed often in Mayan pottery). Unfortunately, Seven Macaw wasn’t dead. He ripped off Hunahpu’s arm and took it back to his house.

The twins went to the houses of their elders. They asked for help to defeat Seven Macaw and get Hunahpu’s arm back. The twins suggested that the elders pretend to be healers and they pretend to be their assistants. Then the elders walked by Seven Macaw’s house selling their healing practices. Seven Macaw invited them in to fix his jaw. He was told that all his teeth need to be replaced. Reluctantly, Seven Macaw agreed to this treatment. The elders replaced Seven Macaw’s teeth with white corn so that he couldn’t eat and he dies. The elders then fixed Hunahpu’s arm. 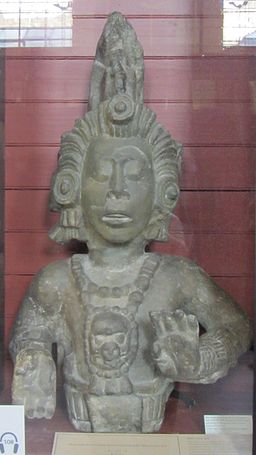 At this point, the Popol Vuh goes back in time to explain who the twins’ ancestors were. Their father was defeated by the Lords of Death in the Underworld. The twins went through many trials concocted by the same Lords but they won and resurrected their father, who came back to life as the Mayan Maize god.

After all their adventures, the Hero Twins went up in the sky and became the Sun and the Moon.

With the Sun and Moon in place, the gods made a final attempt to create humans. This time they mixed yellow and white corn with water to make human flesh. According to the Popol Vuh, “this time the beings shaped by the gods are everything they hoped for and more: not only do [they] pray to their makers, but they have perfect vision and therefore perfect knowledge.” The gods decided that these humans were too perfect, however. They put a fog on the people’s eyes so they couldn’t see that they were godlike.